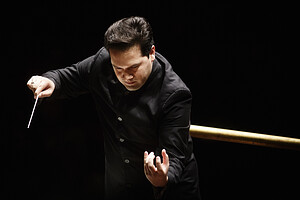 Robert Trevino has rapidly emerged as one of the most exciting American conductors performing today, as well as one of the most in-demand talents of the younger generation, equally thrilling in his titanic interpretations of the core repertoire as in his explorations of new music. He serves as the Music Director of the Basque National Orchestra, Principal Guest Conductor of the Orchestra Sinfonica Nazionale della RAI and Artistic Advisor of the Malmo Symphony Orchestra.

Trevino burst into the international spotlight at the Bolshoi Theater in December 2013, leading a new production of Verdi’s Don Carlo at short notice. The Russian press wrote, “There has not been an American success of this magnitude in Moscow since Van Cliburn.” He was subsequently nominated for a Golden Mask award for “Best Conductor in a New Production”.

His multi-year recording contract with Ondine has already resulted in a widely praised complete Beethoven symphonies cycle with the Malmo Symphony Orchestra, a much-acclaimed Ravel album and a survey of little-known American masterpieces, ‘Americascapes’, both with the Basque National Orchestra. 'Americascapes' was named Editor's Choice by Gramophone magazine, and a 'Best Recording of 2021' by Presto Music, while 'Ravel' was named recording of the month by Limelight, Recording Of The Week by France Musique and Critic's Choice by Record Geijutsu. Trevino’s latest recording is of works by Rautavaara. His cycle of Bruch symphonies with the Bamberg Symphony Orchestra was released by CPO, in August 2020, to universally positive reviews.

Trevino was Chief Conductor of the Malmo Symphony and continues their partnership as Artistic Advisor. Robert Trevino has commissioned, premiered and worked closely with many leading composers, among them John Adams, Philip Glass, Sofia Gubaidulina, Jennifer Higdon, Andre Previn, George Walker, Augusta Read Thomas, Ramon Lazkano, Shulamit Ran and John Zorn. His many education projects include, recently, residencies at the Musikene San Sebastian, and at the Royal Academy of Music.

“After a majestic interpretation of Dvorak’s Symphony No. 7 (the encores) led the public into rhythmic clapping within the pieces and delirious applause…the enthusiasm, with some almost dancing in their seats, got more and more intense…”
Concertnet, reviewing a concert with the Vienna Symphony Orchestra

“The first of three performances...caused a storm of enthusiasm among the audience...”
Neue Zürcher Zeitung, reviewing a concert with the Tonhalle Zürich