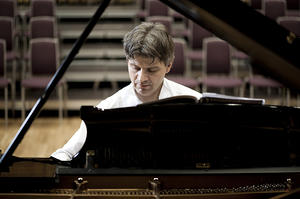 "Pianist Mark Bebbington brings a nice balance of swagger and thoughtfulness to this all-Gershwin programme. He has said he finds a “Mahlerian melancholy” in the second movement of the Concerto in F, which is almost a concerto in itself, and his playing here is supported by some shapely and characterful wind playing. But the whole work brings a tautly wound performance under conductor Leon Botstein. Rhapsody in Blue starts with a clarinet solo even more languorous than usual, and the RPO’s colours at times are almost garish – the muted trumpets play up the wah-wahs for all they’re worth. But the performance is light on its feet, and the Variations on I Got Rhythm are similarly persuasive. An extra CD claims to offer the first recording as a complete set of the eight Preludes – five more than most will be familiar with in this form, all snappily played." - The Guardian