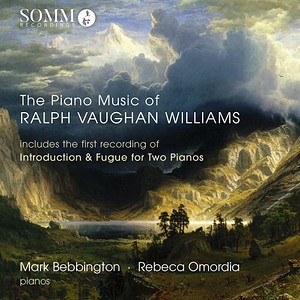 Another disc from Somm that matches its all-round quality with its musical value. I think I am right is saying that pianist Mark Bebbington is Somm's most recorded artist and this is another excellent example of how mutually fruitful this association is. So far Bebbington has produced comprehensive surveys of the solo piano music of Ireland, Bliss and Bridge alongside collections of Arnold, Gurney, Alwyn amongst others. The only real surprise here, and as such it is not really a surprise just a dawning realisation, is how little music for solo piano Vaughan Williams wrote. Given the sheer volume of work in just about every other genre the fact that the original solo piano music totals barely half an hour of dots is unusual at least. But what it might lack in quantity it makes up for in interest and value although - pace the enthusiasm of note writer Robert Matthew-Walker - these are chips off a master's block rather than any true masterpieces in the greater scheme.

But a chip of Vaughan Williams is better than many another. The recital opens with the longest of Vaughan Williams' pieces for solo piano - the impressionistic Lake in the Mountains which he derived musically form his score to the 1941 propaganda film The 49th Parallel. This can be heard in its briefer original orchestral form as part of the suite of music recorded by Rumon Gamba for Chandos. In its keyboard version the performance here shows the familiar virtues of Bebbington's recordings for Somm; crystalline technique, wholly sensitive to the idiom and beautiful caught by the regular Somm production team. Quite whether it is "one of the most remarkable of Vaughan Williams' shorter pieces for any instrument" as Robert Matthew-Walker writes I would question but it is a charmer for sure.

Brevity seems to be the key to all of Vaughan Wiliams' original piano works. There are two collections, placed last on the disc, titled A Little Piano Book and Suite of Six Short pieces. In these twelve self-contained pieces the longest is the Slow Air from the Suite which just breaks three minutes. Indeed concision of length and musical texture is the watchword throughout. Not for the only time there seems to be some conflict between the liner and the disc listing regarding titling and naming of these works. The CD cover calls the first collection [as mentioned above] A Little Piano Book while Matthew-Walker refers to it as Six Little Pieces - Michael Kennedy in his The Works of Ralph Vaughan Williams muddies the water further referring to them as Six Teaching pieces for piano. Regardless of this they are quite delightful and how wonderful that such pedagogic works should distil so perfectly the essence of their composer without raising too many technical hurdles. The No.2 Nocturne is the undoubted highlight but the three two-part inventions reflect the composer's respect for Bach in a delightful way too.

The Suite of Six Short Pieces is relatively better known in its string orchestra transcription by James Brown which the composer titled Charterhouse Suite. More liner text queries here; Matthew-Walker makes a case for the piece being more substantial than the title implies citing a playing time of "a little under twenty minutes". Bebbington's performance here runs 13:39...... He also titles the closing movement Presto Ostinato when elsewhere the liner calls it Pezzo Ostinato. Both of the string orchestra versions I have call it Pezzo too and indeed the Stainer and Bell edition viewable on IMSLP calls it 'pezzo'. Neither of those string orchestra versions get anywhere near twenty minutes either; Lloyd-Jones is just shy of 17:00 and Dalia Atlas is sub 14:00. Putting these quibbles to one side - more important to focus on the music and performance which are exemplary. Again, Bebbington has exactly the right touch - literally technically and aesthetically for this artless music. Vaughan Williams followed the then popular trend for quasi-archaic titles in a Warlockian/Capriol-Suite style; Prelude, Slow Dance, Quick Dance, Slow Air which require the player to play with simplicity and clarity and lack of artifice. I must admit I prefer this work considerably in this its original form. Somehow the transcription to String Orchestra - well though it has been achieved - tries to give the music an extra weight and significance that does it few favours.

The rest of the disc is filled out with transcriptions of works for solo piano, piano duet or two pianos. Here I am in accordance with Matthew-Walker that the greatest of these is Vaughan Williams' contribution to A Bach Book; Ach bleib' bei uns, Herr Jesu Christ. I wonder why Matthew-Walker shoots form the factual hip again calling it The Harriet Cohen Bach Book when in fact the correct title is A Bach Book for Harriet Cohen - additionally the premiere/publication was 1932 not 1930 as cited here. Lastly Matthew-Walker says ten composers were invited to contribute - there are twelve pieces by different composers. By any standards this collection is remarkable not only for collecting the work of 12 major British composers of the day into one place but also as an insight into the impact that Harriet Cohen had on British music in the early decades of the last century. What a shame that Elgar could not be enticed to contribute since he was most certainly under the spell of Ms Cohen at the time. I would commend the full collection either in print or on disc - the only version I know is by the excellent Jonathan Plowright on Hyperion. Vaughan Williams' setting is mighty example of the arranger's art. Not only does he add original material to an already complex score but he creates a touching tribute to the greatest contrapuntal composer of all time. Bebbington and Plowright are strikingly similar in their poised and sensitive approaches - this is a glorious piece.

I must admit I was curious to hear how any transcriber of the Tallis Fantasia could possibly take a piece which embodies so much of the essence of being a string player and transfer it to two pianos. I have to say I like the actual performance by Mark Bebbington and his colleague Rebeca Omordia very much. Sensibly they choose tempi that keep the music flowing and allows climaxes to build powerfully and impressively. Likewise the antiphonal effects - nominally between the 'distant' smaller string group and the main orchestra are well achieved. But of course the arrangers, to achieve a crescendo through a held chord and the like, have to deploy all the old tricks of Graingeresque "woggles" and broken arpeggios. There is literally no other way it could be done but the extraordinary impact of the work is diminished. An "average" performance last around 15-16 minutes - Boult is 16:33 and the visionary Andrew Davis version atmospherically recorded in Gloucester Cathedral stretches that to 17:10 quite breath-takingly. Bebbington and Omordia skip through it in a pacey 12:29. I am very glad to have heard it but would never listen to this arrangement - in any performance - over the original. One tiny textual quirk - the very final chord is marked with an apoggiatura which allows the string to 'spread' the chord - its a simple but striking effect which allows that chord to springboard into infinity. Here it is played as a straight single-sounded chord - but there is the benefit that the piano's sustain pedal allows for a perfect diminuendo to silence which few string orchestras manage.

The well-known Fantasia on Greensleeves also receives the piano duet treatment. Again, the players favour a fairly no-nonsense brisk approach - here around a good half minute quicker than most orchestral versions. I am less convinced by the hearty speed for the central section which removes a substantial element of the 'fantasy' from the work. Another transcription/keyboard treatment is accorded Orlando Gibbons' Song 13 - again dedicated to Harriet Cohen. I had never heard this work and again it shows the composer's remarkable affinity with music for an earlier age. Bebbington really is in his element here - allowing the music to unfurl with unhurried dignity and a sense of reverential musing. Again, I was struck by the lucidity of the Somm recording - back on their finest form after a recent set of the Scriabin Sonatas I reviewed which somehow lacked the sheer simple beauty of piano tone this disc captures effortlessly.

So to the last work and the one which will have caught the eye of many admirers and collectors of Vaughan Williams' work. This is the premiere recording of the very substantial Introduction and Fugue for Two Pianos. This works dates from the mid 1940's when Vaughan Williams was reshaping his Piano Concerto as a work for two pianos. Running to 17:22 in this performance this is by some distance Vaughan Williams' most substantial work for solo keyboard(s). This makes its utter unfamiliarity all the more curious. Michael Kennedy lists a single reference to the work on page 251 - which then does not exist! The piano score can be viewed on IMSLP. The only substantial analysis of the work I know is in AEF Dickinson's 1963 survey (Faber & Faber) simply titled Vaughan Williams. This is an occasionally tetchy book but valuable because Dickinson often examines works other books barely even mention. The Introduction and Fugue has over a page to itself and Dickinson concludes; "The suspicion is aroused that this fugue was begun as the simplest way of constructing a schedule for two pianos... the upshot is a somewhat capricious work, twisted from the agility of its apparent fugal intentions into a mood of blunt sententiousness from which it appeared to have escaped. The piano writing is also inclined to be stiff and cumbersome, and to be obsesses with multiple 1-3-5 or 1-4-6 melodic movement, a reversion to the style of early Debussy, as if it were meaningful". Elsewhere I find Dickinson's assessments overly harsh, but here I find it hard to disagree.

Again I have nothing but praise for this performance - Bebbington and Omordia generate real atmosphere and power. It does seem an oddly unbalanced work - the prelude lasts just over two minutes before this massively extended sombrely brooding fugue. I have to say I am not wholly convinced by the work - for extended passages the textures seem rather thick - quite the reverse of the clarity that made the two short collections such a delight. Even when Vaughan Williams pulls back on the heavier dynamics the contrapuntal writing remains complex. Again I must stress that the performance here is exemplary in teasing out the density of this writing allowing the novice ear to be guided by the fugal material. But ultimately there is an abiding sense of the material being 'worked', a sense of labour that simply does not exist in the finest Vaughan Williams scores. For once the absence of a work from the catalogue is explicable. My feeling after several listens but of course having not 'lived' with the work is that it is of interest to the composer's aficionados without in anyway being a lost masterpiece. My last divergence from Mr Matthew-Walker is when he calls it "the greatest work for two pianos by a British composer of any generation." A remarkably bold statement and one that chooses to ignore Bax's contribution to the genre for one, let alone Ronald Stevenson, Kenneth Leighton and Percy Grainger for starters.

For 2017 Somm seem to have adopted a new logo and branding which is attractively minimalist and sophisticated. For the rest, the presentation of this disc is to their usual high standard in every respect; technical and musical - my only disappointment is with the liner writing. Since this single collection exhausts all of Vaughan Williams' solo piano music I hope Somm will consider commissioning Bebbington to explore more of the transcriptions of the orchestral works much as they have done for Delius. Off-hand I do not know how many of the Symphonies exist in transcribed form but I suspect Bebbington and Omordia would be superb advocates - certainly the transcription of Job would be fascinating to hear. A valuable if not essential disc.