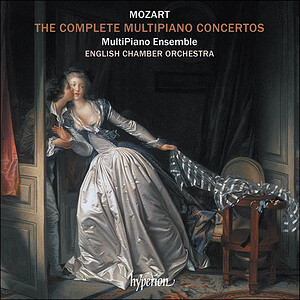 Throughout history, many composers have devoted thought and attention to the challenging genre of ‘multi-hand’ piano music. Examples can be found in abundance all across the Western concert repertoire, ranging from Bach and his sons to Ravel, Stravinsky and Schnittke. But it seems that only one great composer showed consistent interest in this genre throughout his entire creative life and contributed to it in almost every possible combination known in his day — and that is Wolfgang Amadeus Mozart. The evidence spans his entire career, from an early keyboard sonata for piano duet, K19d, which he composed when he was only nine (1765), to the late sonata for four hands in C major, K521, completed only four years before his death (1787) — not to mention the two fantasias in F minor, K594 and K608, composed in his very last year (1791) for a ‘mechanical organ clock’ and published posthumously as piano duets. And so, over a quarter of a century, Mozart produced a glorious chain of compositions, either for four hands on one piano or for two pianos, as well as concertos for two and three pianos with the accompaniment of an orchestra (each of which he composed in two different versions). This is an unparalleled scope of composition that brought Mozart to a rare understanding of the ‘multi-hand’ piano genre and to a perfect command of its different forms and variants. - Tomer Lev