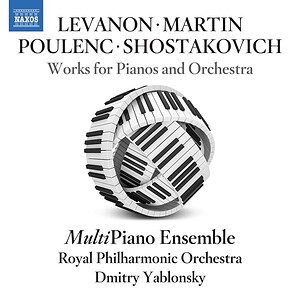 The central work on the new recording is a new official version of Frank Martin's Petite symphonie concertante, which has a fascinating back-story. The ever-experimental Martin scored the work originally with a highly unusual combination of solo instruments — piano, harp and modern harpsichord set against a double string orchestra! — but so difficult is this combination to make work acoustically in a concert hall that Martin himself wrote, "I was convinced that this sonorous work, owing to its experimental nature and its unusual combination of instruments would be restricted in its performance...I feared that it would remain an instrumental curiosity...". So Martin revised the work for orchestra-only, with no soloists, sacrificing the originality of his concept to the cause of more programmable forces, "(to) allow the work to be more widely performed".

Lev approached the Frank Martin estate and publishers Universal Edition with the idea of rearranging the work for three pianos and double string orchestra, so restoring some of the sense and sonorities of unusual instrumentation while using forces that more easily work acoustically. Lev's new arrangement for MultiPiano was enthusiastically welcomed by the estate, and is now published as an official arrangement in the Martin catalogue. This is the world premiere recording.

Shostakovich's concertino, the other work on this album to receive a special arrangement, is a play on the Baroque form of the concerto grosso. Lev had the idea to turn it from a piano duo work into a 'real' concertante piece for two pianos and string orchestra, thereby bringing it closer to an actual concerto grosso! This world premiere recording of this innovative version has received personal approval by Shostakovich's widow, Irina Antonovna.

Alongside the two arrangements are one of the most popular concertos for multi-hand piano and the world premiere recording of a new Israeli work, both of which play with various styles and traditions. The first is Poulenc's famous Concerto for Two Pianos in D minor, a piece that MultiPiano has regularly explored since its inception. The Israeli work is Aryeh Levanon's Land of Four Languages for two pianos and eight hands; each beautiful and richly textured movement of which is based on a folk song in one of the four main languages to be found in Israel — Hebrew, Arabic, Yiddish and Ladino.

"Unique repertoire that includes world premieres, discoveries and considered experimentation are part of MultiPiano's mission," says Artistic Director Tomer Lev, "The rich and varied textures that a long-standing multi-hand piano ensemble are able to find, allows for a very special and unusual kind of exploration that can complement, and reveal. With this album of three world premieres set against an acknowledged masterpiece of the canon, all by composers active in the Twentieth Century, we continue MultiPiano's quest to help develop and extend the great tradition of multi-hand compositions that flourished in the early-to-mid 1900's."

The members of MultiPiano featured in this recording are Founder and Artistic Director Tomer Lev, Berenika Glixman, Daniel Borovitzky, Almog Segal and Nimrod Meiry-Haftel (see photo above). MultiPiano is an ensemble-in-residence of the Buchmann-Mehta School of Music at Tel Aviv University.