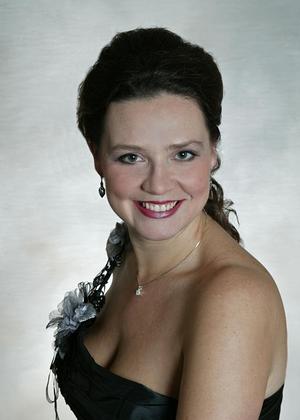 Preparing for The Last Night of the Halle Proms this weekend, the leading English soprano on loving her new voice, and a spot of genre-jumping.

Sarah Fox, increasingly acknowledged as one of the most talented English sopranos of her generation, has been going through changes in recent years. Richard Hickox, a mentor and great supporter, sadly passed away just as other conductors have forged newer close professional relationships – Ian Page and his much-respected Classical Opera Company, darling of the BBC Proms John Wilson, most recently Sir Simon Rattle has renewed his association with her for Mahler’s Second Symphony with the Berlin Philharmonic in Vienna. Her voice itself has changed – the Baroque lightness of old has now blossomed into a refulgent, gorgeously secure Mozart/Strauss-style soprano.

And she herself is perfectly comfortable swapping the solemn grandeur of Mahler with a Rattle or a Maazel, for the high-kicking romanticism of Rodgers and Hart – as with her hit concerts with Wilson at the Proms – or touring European venues alongside Rufus Wainwright. And of course, back again – this year brings four Wigmore Hall dates including their New Year’s Eve concert. IPMC’s James Inverne asked her about coping with change and, indeed, thriving on it.

JI: You’ve cultivated almost two different sides of your musical personality, even though they’re clearly linked – over the last few weeks, for instance, you’ve sung Mahler’s Second Symphony for Simon Rattle and the BPO in Vienna, given concerts alongside Rufus Wainwright in Europe and starred in Gilbert and Sullivan’s Trial By Jury for John Wilson and the Royal Liverpool Philharmonic. You also sing a great deal with John Wilson’s own orchestra, MGM musicals and the like. Is the experience of singing all of these the same?

SF: I get completely the same satisfaction. Even though the Berlin Phil and John Wilson Orchestra are chalk and cheese repertoire-wise, the standard has to still be the same. In the case of the lighter repertoire, people often make the mistake of thinking it’s easier to sing, but it needs just as much work as Mahler or Strauss or anything else. In some ways it makes no difference to me because music is music, and if your voice feels like it fits the music then you treat it with the same seriousness you treat any other job.

JI: Perhaps the (very sad) closing of so many record shops actually open up an opportunity of sorts – that people don’t in their minds categorise music into so many micro-genres the way they used to when they were billed that way on the shelves. So they’re more open.

SF: Good point, especially as regards classical, as I suspect a lot of people never used to go into the classical section of Tower Records. So maybe there are advantages.

JI: Is your preparation essentially different for the heavier than the lighter stuff?

SF: All I ever do is prepare from the vocal viewpoint, and then I might do a bit of listening to recordings, though not too much so I’m not over-influenced. Once I’ve decided I want to do something one way I find it hard to change my mind, so I try not to have made those decisions before turning up for rehearsal.

Simon Rattle, for instance, wanted me to sing the first phrase in Mahler’s Second Symphony with almost no vibrato at all. I would never decide to do that, so you have to just prepare and be flexible to the conductor, they will tell you how they want it. With Rufus as the composer of his music he would even change things while working with me, even modelling certain things on my voice, which I’d never had before. And John Wilson knows his craft so well and gives very good instructions in rehearsals. So I like to be a canvas for the conductor.

JI: Your voice has changed significantly in the last few years, really gaining in body and warmth and that has changed the kinds of roles you can sing. You’re now much more a Figaro Countess than a Susanna, so to speak. How has that quite fundamental change affected you?

SF: The year I did Mimi in La boheme was the turning-point, 2009-10. I had two contracts in a row – one in Norway and one at Opera North and they were both Mimi. So I did 17 performances of the role, and it really felt like it trained my muscles up. But it’s only when you emerge from doing repertoire like that, that you notice changes. The September after that Mimi, I recorded French songs with Malcolm Martineau and suddenly I could diminuendo properly on sustained notes and that had come from singing Mimi over eight months!

But yes, the voice itself has changed a lot. It’s now ready for the Countess in Figaro, Pamina, some of the Britten roles, Strauss - definitely the
Marschallin and also Capriccio. I’m singing Micaela at Covent Garden later this year and that’s perfect timing for me. You need a certain size of voice because of the duet with Don Jose, the meatiest part of the whole role art, more than the aria.

The great thing about my voice changing is that at last it’s ready to do things I’ve hungered for, for the best part of 20 years. Mind you, most of the opera roles I’ve done are the kinds of people in daily life who I’d want to slap, so it can be quite a test of acting! The parts I can sing now are finally the ones that are also more suited to my own personality.

JI: You’re about to sing The Last Night of the Halle Proms, this weekend.

SF: Yes! That’s the one concert I’ve always wanted to do! It’s in the North of England, so lots of my family and friends can come. A busload is coming from my parents’ village –there’s a waiting list to get a seat on the bus! And I love performing with the Halle, a lovely bunch of people to work with and brilliant players. I’ve done quite a lot with them and know them quite well. That kind of occasion demands a varied program, something for everybody, which I enjoy. I’m doing “Dove sono”, Noel Coward’s “There’s always something fishy about the French”, some Britten and some Ivor Novello. Mixing genres again, it keeps things interesting!
Sarah Fox is represented by Inverne Price for general management. For enquiries please contact James Inverne (james@inverneprice.com) or Patricia Price (patricia@inverneprice.com).

Sarah Fox sings MGM musicals with John Wilson and his orchestra at the BBC Proms - http://www.youtube.com/watch?v=x0PwLY-uiag