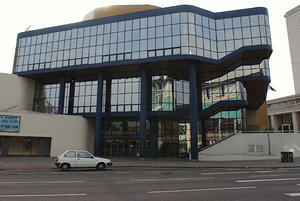 Who would have thought that a blizzard in New York had the power to turn Gershwin's Rhapsody in Blue into a Haydn Piano Sonata in Nottingham?

But that's what happened when American pianist Lara Downes got stuck on the other side of the Atlantic.

Luckily British pianist Mark Bebbington came to the rescue - with almost no notice, but with consummate calmness.

There was certainly nothing second-best about his performance of a programme that had plenty of drama and virtuosity.

He started with Haydn's Sonata No. 60 in C, a work which demands crisp articulation and transparency of texture.

Its witty, slightly whimsical opening themes were developed into something altogether more profound - indeed such was Mark's grasp of the work's intricacies that the first movement earned him prolonged applause.

His spoken introduction to the following piece, César Franck's Prélude, choral and fugue, was itself a masterpiece of illuminating concision.

Its structural complexity makes it a challenging work to listen to - so heaven knows how long its monumentality takes a performer to master.

This performance was not only technically impressive but Mark's incisive intelligence gave life and light to music which risks becoming heavy and opaque in the wrong hands.

Sunday's Nottingham performance could be a step towards revival for a concert hall rarity.

Then came Liszt in the form of two operatic arrangements, one of the Liebestod from Wagner's Tristan und Isolde and the other his paraphrase of tunes from Verdi's Rigoletto.

The first is a faithful, reverent transcription turning the piano into a one-man orchestra. The other, as Mark Bebbington admitted, teeters on the edge of bad taste, offering a shamelessly pyrotechnic display of over-indulgence.

Any member of the hugely enthusiastic audience who feared that Gershwin had been snow-bound would have smiled when Lady Be Good appeared as Mark's encore.