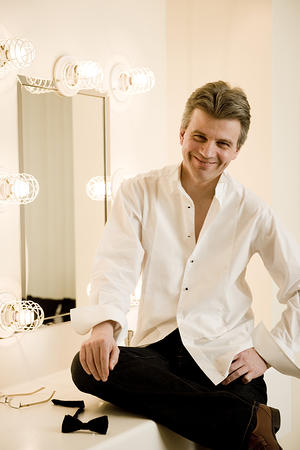 Mark Bebbington: In a state of Bliss

A world premiere and his piano masterpiece grace Volume Two of The Complete Piano Music of Sir Arthur Bliss, on SOMM Recordings

With a run of seven five-star reviews in a row from BBC Music Magazine, “IRR Outstanding” from International Record Review for his most recent release and plenty of Gramophone “Editor’s Choice” recommendations, Mark Bebbington can be ranked among the outstanding pianists of our day. Dubbed “the concert pianists’ Richard Hickox” by International Piano for his forays into the great, often neglected legacy of English piano music, his newest CD series continues that path. Following his much-acclaimed complete traversals of the music of Ireland and Bax, May 5th sees the release of Volume Two of “The Complete Piano Music of Sir Arthur Bliss”.

Volume One garnered impressive reviews, not least for Bebbington himself (“Bebbington’s impressive and near-flawless expertise” – BBC Music Magazine; “he gets right to the emotional heart of the Suite” – The Guardian; “a vivid portrait of one of the most important English composers of his period” – Gramophone) – yet the name Arthur Bliss does not often set pulses racing today. Despite his tenure as Master of the Queen’s Music, despite his extremely successful music for concert and for film, his popularity has not outlived him. This, believes Mark Bebbington, is a scandal.

“We’re talking here about the man generally regarded as Elgar’s successor, a man who was inspired by his heroes Vaughan Williams and Holst and yet was hailed as a fresh new voice.”, says Bebbington, “Perhaps his establishment success as the Queen’s composer and the very different demands of Hollywood somehow made him less fashionable, certainly in the face of the rise of Britten and Walton. Or perhaps it is that Bliss’s piano writing shuns the concept of ‘Englishness’ – that elusive, water-colour, pastoral quality that defines much of John Ireland’s and Arnold Bax’s piano worlds, for instance.

“Bliss, on the contrary, is frequently outspoken, combative and even rebarbative, with angular musical contours replacing the more moulded phrases of his British composing colleagues. Indeed, the 1920’s piano works on this disc, the Two Interludes and Masks, suggests something of an enfant terrible of the British establishment. A tearing up of the rulebook in the manner of Bliss’s idol Stravinsky.”

The new album encompasses some of Bliss’s most important works, including both a world premiere recording and a rare outing for what Mark Bebbington sees as the composer’s supreme masterpiece, Triptych. And the works have been deliberately selected to show the range of Bliss’s writing. “He was himself a fine pianist,” says Bebbington, “who knew how to write for his instrument. And my goodness he has left us some incredible work!”

First on the volume is 1924’s brilliantly entertaining Masks. The four miniatures look forward to the film world that Bliss would later inhabit with such brio, and almost seem to comprise four toe-dips into cinematic music styles – ranging from the Chaplinesque high jinks of No 1, to the mock-military bluster of No 4.

A whiff of late Romanticism suffuses the Two Interludes (1925). Bliss may have been a forward-thinker, but these works seem to reflect the tastes of their American commissioner, Elizabeth Sprague Coolidge, who supported modern music with more than a touch of longing for the musical world of the nineteenth century.

The world premiere is the fascinating early work, Suite for Piano (1912). In his early twenties, Bliss reveals a romantic yearning for the worlds of Brahms and Chopin – shot through with flashes of originality and inspiration that show what Bliss was later to become. And what he became is nowhere as clear as in his quietly magnificent Bach transcription, Das alte Jahr vergangen ist (1932, “The Old Year has Passed”), a model of restrained poignancy.

Two mini-dances bookmark the longest work on the disc – Bliss and The Rout Trot. They appear to mimic popular dances of the day yet secrete, as so often with this composer, a darker irony.

But it is Triptych, Bliss’s final work for solo piano, that Bebbington considers his greatest achievement. Premiered by Louis Kentner at London’s Queen Elizabeth Hall in 1971, Bebbington calls its total absence from piano recital programmes today, “as baffling and surprising a neglect as I’ve encountered of a composer. Triptych marries vivid colour with drama and virtuosity. Even today, more than 40 years after its premiere, its austere brilliance shows us exactly what Bliss always remained at heart. A radical. And a genius.”

Listen to a track from the new recording here.

Mark Bebbington is one of the UK’s most respected concert and recording artists (exclusively for Somm). He has made more than 30 recordings, including the world premiere of Vaughan Williams’s Fantasy for Piano and Orchestra, three much-admired early Mozart piano concertos, and the complete piano music of Mario Castelnuovo-Tadesco, John Ireland, Arnold Bax and of Frank Bridge. Forthcoming recordings include George Gershwin’s Concerto in F.

SOMM Recordings, for which Mark Bebbington has recorded exlusively, was founded in 1995 with the aim of building its catalogue around fresh and unusual repertoire, performed by artists of great talent and scholarship. The brainchild of Siva Oke, the Surrey-based label with worldwide distribution has a proclaimed special passion for British music, and its admired catalogue includes many premieres of composers recorded with leading British artists.