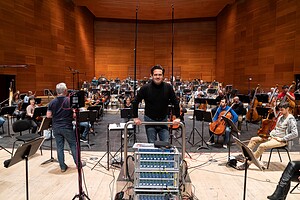 Many commentators agree that the five years since fast-rising American conductor Robert Trevino became Music Director of the Basque National Orchestra have been a golden age for the top Spanish ensemble – with international tours, award-winning recordings and highest-level performances (their recent Mahler Symphony No 2 together had critics reaching for the superlatives – see below for viewing link). Now, with the end of his second term imminent, the orchestra has extended Trevino's tenure in perpetuity. According to the official announcement, "With the end of the 21/22 Season, Robert Trevino completes his fifth and last season as the chief conductor. However, the great artistic results that the orchestra is achieving in recent years, and which has received widespread backing from critics, have led to the decision to continue and extend his tenure without specifying an end date."

Trevino, who is also Principal Guest Conductor of the Orchestra Sinfonica Nazionale della Rai, has busy months ahead of him. Following his successful debut earlier this season, in September he will lead the La Scala Philharmonic on a tour of Italy and Austria, including La Scala itself, Portogruaro, Salerno and Eisenstadt (near Vienna). During the same period, he will conduct the Rai, in Turin and Milan. He has also just concluded another Italian debut – three sold-out performances of Mahler's Symphony No.7 with the La Fenice orchestra, in Venice. And he returns to Italy this summer to lead a production of La Rondine at the Puccini Festival in Torre Del Lago.

The Basque announcement coincided with a Mahler 2 that had been much-delayed due to the pandemic, but in the event won standing ovations and superb reviews. Leading Spanish music magazine Platea wrote, "Monumentality, grandiosity, grandiloquence...and emotion, a lot of emotion among both the audience and the performers." The review went on to note, "Under the auspices of Robert Trevino, the Basque National Orchestra has confirmed that for now it has no clear limit regarding its trajectory. The ensemble's evolution is obvious and admirable, season after season. The sound is emphatic, the attack firm, there is presence and consistency in all members, the ensemble is confident and precise. The Basque National Orchestra is on the best possible path and this Mahler has been another confirmation of its potential."

"I am delighted to continue on as Music Director of the Basque National Orchestra, whom I regard as very much part of my musical family," says Robert Trevino, "The steps we have taken together, the adventures we have had, and of course some hard times as well, especially during the pandemic, have been unforgettable. I am as ever deeply grateful to the musicians, and to the orchestra's wonderful manager Oriol Roch and his team. I look forward very much to our next explorations!"

Later this year will see the release of Trevino and the orchestra's 'sequel' to their much-acclaimed Ravel recording on Ondine. The first Ravel album attracted no fewer than six 'Recording of the Month'-style accolades internationally from leading outlets as far afield as Japan (Record Geijutsu), Australia (Limelight, and ABC Classic), France (Radio France Musique) and the US (iTunes); as well as five-star reviews from Classica (France) and Classics Today (US). Their other recent recording for Ondine, "Americascapes", has won similarly widespread praise, including Best Recording of 2021 from Presto Music (UK), "Editor's Choice" from Gramophone, Recording Of The Month from PhonoForum, Recording Of The Month from Limelight, and five-stars from both Classics Today and Classica (France). The New Yorker's Alex Ross hailed both albums as "startlingly excellent" and "superb".

Next season with the BNO, Trevino will lead a fascinating mix of monumental classics – such as Bruckner's Eighth Symphony and Mahler's Symphony No 5 – and modern works such as John Adams's Doctor Atomic Symphony, and premieres by Zuriñe F. Gerenabarrena (Lorratz), Ramon Lazkano (Mare Marginis) and Gary Carpenter (Ghost Songs).

Trevino's latest recording is "Lost Landscapes" – works for violin and orchestra by Rautavaara, with the Malmo Symphony Orchestra for Ondine. He has also recorded for Ondine the complete Beethoven symphonies, "Ravel" and Americascapes. Other recordings include the complete Bruch symphonies with the Bamberg Symphony Orchestra for CPO ("Robert Trevino joins a select list of conductors who have succeeded in making these awkward but intensely lovable works sing" – Gramophone).