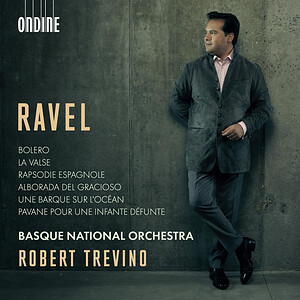 Robert Trevino's second outing with Ondine Records, a distinctly Basque view of Ravel, as presented by the fast-rising American conductor and the Basque National Orchestra – of which he is Music Director – has been greeted with a plethora of positive reviews and no fewer than five 'best of' picks.

It has been named 'Disque du jour' by Radio France Musique; the month's 'Critic's Choice' by the leading Japanese magazine Record Geijutsu; Recording Of The Month by Australia's leading arts magazine Limelight; Recording Of The Week by Australia's ABC Classic (radio); and made Apple Music's 'Best New Classical Releases' chart. In addition it has received sterling reviews from BBC Music Magazine, Gramophone, Diapason, Scherzo and elsewhere.