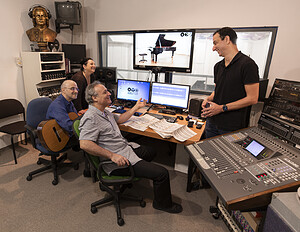 In December 1920, two years after Claude Debussy’s
death from cancer, Parisian musical magazine La Revue musicale announced its intention of commissioning a series of individual works to be put together in a cycle, to be called Le Tombeau de Claude Debussy, to commemorate the famed composer. Ten composers answered the call and contributed to this special cycle - Stravinsky, Bartók, Ravel, Satie, Dukas, de Falla, Roussel, Schmitt, Goossens, and Malipiero. The fact that the participating composers were of different ages and came from broad and diverse cultural backgrounds led to highly individual works all indicative of the respective composers' style, however, many also represented the prevalent styles of post-First World War Paris and as such evoked Debussy's own aesthetic outlook.

With no clear parameters given regarding instrumentation, it is no wonder that the resulting cycle was so diverse - which may explain why there are so few complete recordings of the work. Now, thanks to Director Tomer Lev and his colleagues at the Buchmann-Mehta School of Music, this will change as a digital release of the work is set to be issued 100 years to the month since the original edition of the work appeared in La Revue musicale.