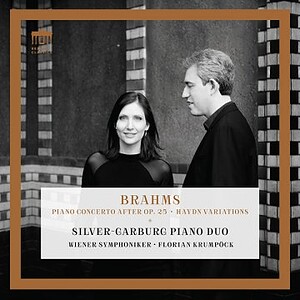 This fascinating new work was commissioned by the 2020 Opus Klassik Award-nominated Sivan Silver and Gil Garburg.

Brahms's love of piano music for four hands is well-known, and can be seen in the rich array of works he wrote in that genre. Now, admired composer and arranger Richard Dünser has created a fascinating 'new Brahms piano concerto' for piano four hands and orchestra, written for the Silver-Garburg Piano Duo.

Silver-Garburg have already started performing the concerto around the world and have made a world premiere recording for Berlin Classics, for release on 9th October (26th October in the UK).