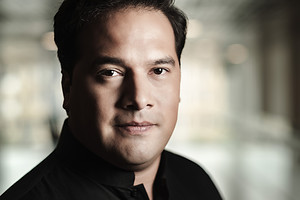 Robert Trevino, one of today's most in-demand American conductors of the younger generation, has signed with Ondine for a major, ongoing recording relationship. Trevino is chief conductor of the Basque National Orchestra and of the Malmo Symphony Orchestra, both of which will feature in the first releases - a complete Beethoven symphonies cycle drawn from this season's Beethoven Festival in Malmo and, with the Basques, a survey of American repertoire to include neglected works by Howard Hanson - as well as digital releases of core repertoire works.

Ondine, part of the Naxos group, is one of the most prestigious independent recording labels in the world and has regularly recorded other important conductors such as Christoph Eschenbach, Vladimir Ashkenazy, Esa-Pekka Salonen and Hannu Lintu. "Ondine chooses the artists with whom it works very carefully," says the label's founding director Reijo Kiilunen, "We try to find the special few; great artists who perform visionary and imaginative interpretations of standard repertoire and who also have an adventurous mind in presenting the public with fascinating lesser-known musical discoveries. Robert Trevino is a perfect match for these qualities. He is, already, a conductor of real musical power with a highly original, probing mind. I am thrilled to welcome him to the Ondine family."

Trevino, a self-confessed avid lover of recordings and the recording process, confesses that, "I have had my heart set on Ondine for a long time. Their Sibelius recordings under Leif Segerstam have long been absolute favourites of mine, paragons of how the production- and interpretive-sides can come together to make something to treasure. I knew that I wanted to be part of that tradition. Meeting Reijo only increased my delight at becoming an Ondine artist. I very much look forward to doing great work with Ondine and with my orchestras; with partners such as these it becomes a joy."