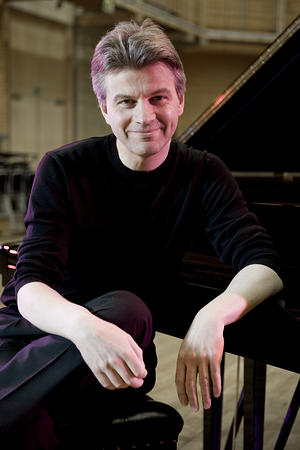 The critical plaudits that have greeted Mark Bebbington’s performances and recordings have singled him out as a British pianist of the rarest refinement and maturity (“Bebbington is without doubt one of Britain’s finest pianists”, wrote Michel Fleury recently in Classica).

Internationally recognised as a champion of British music, in particular, Mark has recorded extensively for the Somm label to critical acclaim, with no fewer than nine of his recent CDs awarded 5***** by BBC Music Magazine. His most recent recordings include piano works by Arnold Bax and Harriet Cohen (an April 2019 Gramophone magazine ‘Editor’s Choice) and Vaughan Williams, which reached number 4 in the UK classical charts, three British Piano Concertos with the City of Birmingham Symphony Orchestra, and an all-Gershwin album with Leon Botstein and the Royal Philharmonic Orchestra (‘Recording of the Month’ from MusicWeb International). His 2020 Poulenc release with the Royal Philharmonic Orchestra and conductor Jan Latham Koenig is the first in a French music series for Resonus Classics label.

A CD of Concertos by Grieg (including the première of his sketches for a Second Piano Concerto, edited by Robert Matthew-Walker) and Delius with the Royal Philharmonic Orchestra and Jan Latham Koenig was released in April 2018 and became ‘CD of the Week’ in The Times and Mail on Sunday. His première recordings include one of Arnold Bax’s Piano Concertino coupled with John Ireland’s Piano Concerto and Legend, and premières of Vaughan Williams’ Fantasia and William Mathias’ first two Piano Concertos (Ulster Orchestra). In addition to concerto recordings, Mark completed his John Ireland and Frank Bridge solo piano series and released a CD of William Alwyn’s piano works in 2016. As well as his BBC Music Magazine success, he has won Gramophone magazine’s ‘Editor’s Choice’, International Record Review’s ‘Outstanding’ accolade and many others. International Piano Magazine wrote of him, “Bebbington’s revivals of British piano music are second to none; he could well be dubbed the concert pianists’ Richard Hickox. Bebbington has almost single-handedly demonstrated that 20th-century British piano scores have an exciting role to play in the concert hall and recording studio”.

Over recent seasons Mark has toured throughout Central and Northern Europe and in the United States (both as recitalist and as soloist with some of the world’s leading orchestras), as well as the Far East and North Africa. In 2017 he made his Carnegie Hall debut with Leon Botstein and the American Symphony Orchestra and also appeared with the Buffalo Symphony Orchestra and on tour with the Israel Camerata and Czech National Orchestra. Within the UK, he has appeared in concertos with the London Philharmonic, Royal Philharmonic and Philharmonia Orchestras, Flanders Symphony Orchestra, the London Mozart Players, Orchestra of the Swan and BBC Concert Orchestra. He has featured both as soloist and recitalist on BBC Television and Radio and also on major European Television and Radio networks.

Mark studied at the Royal College of Music where he was a recipient of numerous international awards and prizes, including a Leverhulme Scholarship, a Winston Churchill Fellowship and the Ivan Sutton Recording Prize – the latter awarded to the one outstanding graduate of the combined London Music Colleges. He later studied in Italy with the legendary Aldo Ciccolini.

Biography 531 words, as of March 2020. Please dispose of previous biographies. Any changes made to the above must be approved by James Inverne Music Consultancy prior to use