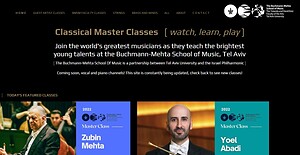 * Launching with tailored channels including, variously, strings, brass and woodwinds, more channels will follow including piano, and vocal

* The BMSM is part of Tel Aviv University and the partner school of the Israel Philharmonic - many of the artists featured on www.classical-masterclass.com are guest artists, or members, of the IPO

When Zubin Mehta launched the Buchmann-Mehta School Of Music (reviving one of Israel's most storied music institutions, formerly the Israel Academy Of Music and Rubin Academy), he remarked at a gala concert, "What you see and what you hear is my dream come true." Part of that dream has been bringing to the school's talented students, master classes both from faculty members - many of them prominent members of the Israel Philharmonic - and from the many famous musicians who come to play with the IPO, and generously give of their time to come to the school at its beautiful Tel Aviv University campus. Now the BMSM is proud to make some of the best of those master classes a resource for every budding musician, everywhere, with the launch of www.classical-masterclass.com!

Most of the master classes are filmed in the BMSM's regular performing venue, Clairmont Hall, several others in the school's in-house recording studio and some in the Israel Philharmonic's chamber music venue, Zucker Hall. The website will be continually updated with new master classes and with new features - there are currently dedicated channels for string, and for brass and woodwinds, and these will be added to, soon to include, for instance, piano and vocal channels.

Announcing the launch of www.classical-masterclass.com, Uri Rom, Director of the BMSM, said, "This is a thrilling moment for all of us at the Buchmann-Mehta School Of Music: the Classical Master Classes website has now been launched! This long-standing initiative going back to the Music School's Founding Director, Prof.Tomer Lev and delayed in the past two years due to the COVID pandemic, has now come true thanks to a concentrated effort on the side of the School's artistic faculty and staff. Our warmest thanks to all who have contributed to this unique and fascinating site showcasing our students, faculty, and international guests. At the time of launching the site, we have put an emphasis on master classes in orchestral instruments; however, piano, vocal, and conducting master classes will be added soon and we hope that people will continue to check in as we add more and more."

The master classes are all given in English, as part of the International Program - which welcomes elite music students from around the world, also offering them free tuition and opportunities to apply for accommodation scholarships and daily living stipends. Other recent master classes given at the school, though not at this time featured on the new website, have included Lahav Shani, BMSM alumnus and Music Director of the Israel Philharmonic, Leif Ove Andsnes, Alan Gilbert and Ilan Volkov.

The Buchmann-Mehta School of Music was founded in 2005 as a unique partnership between Tel-Aviv University (TAU), the largest and most comprehensive university in Israel, and the Israel Philharmonic Orchestra (IPO), the country’s most prominent music institution.

The school’s mission is to train outstanding young musicians and to prepare them for professional careers, as well as to create future generations for the IPO. Many have gone on to great success, including as members of the Israel Philharmonic, other orchestras around the world and distinguished solo or chamber music careers. Indeed, the current Music Director of the Israel Philharmonic, Lahav Shani, is one of the school’s distinguished alumni.

Considered one of the world’s elite music education facilities, the Buchmann-Mehta School of Music combines an intimate, intensive and personalised study experience in what many students describe as a “family-like atmosphere” with frequent exposure to the Israel Philharmonic Orchestra, its renowned guest artists, and teaching by internationally-respected faculty and staff, all in one of the great cities of the world.

The school's roots go back to 1945, when it was first established as the Israel Academy of Music, later named after philanthropist Samuel Rubin. The school has had three Honourary Presidents in its history - all three titans of the music world - Arnold Schoenberg, Leonard Bernstein and, currently, Zubin Mehta.

An early Director of the school was the great violist and composer Oedoen Partos, and future Directors included such eminent Israeli musicians as pianist and conductor Arie Vardi, composer and conductor Noam Sheriff and the pianist Tomer Lev. The current Director is Uri Rom.

The founding of the school was made possible thanks to the generous donation of businessman Josef Buchmann, vice president of the board of governors of Tel Aviv University and a staunch friend of the Israel Philharmonic Orchestra. As the school's Honorary President, Zubin Mehta was an active figure in the foundation of the school.

Over the years, the school has fostered many famous soloists, singers and conductors, and fed the ranks of some of the world’s most important orchestras. It has been home to outstanding alumni, from Itzhak Perlman, Pinchas Zukerman, Menahem Pressler and Veda Kaplinsky to young stars of today such as Lahav Shani and Boris Giltburg.

More information about the Buchmann-Mehta School of Music can be found here: https://en-arts.tau.ac.il/Music